Hockley Golf Club’s Logo is the ‘Trusty Servant’. Some have thought that it was a fox, but in fact it is  a “hircocervus”, or “goat-stag”. The association of the Golf Club with the Trusty Servant is due to the close links of the Club with its landlord - Winchester College. 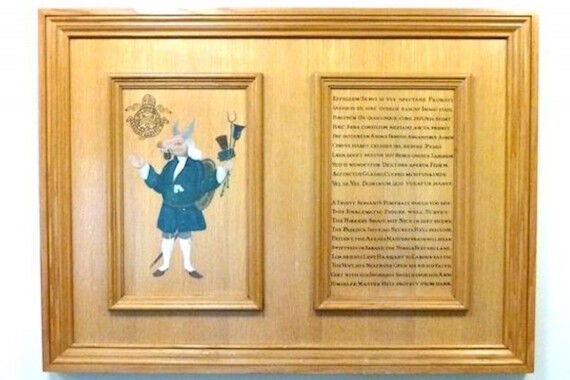 A reproduction of an image of 'The Trusty Servant' that was painted on a wall outside the kitchen of Winchester College by John Hoskins in 1579 is shown at the left.

It was described by the author Arthur Cleveland Coxe as “a figure, part man, part porker, part deer, and part donkey; with a padlock on his mouth, and various other symbols in his hands and about his person, the whole signifying a most valuable character.”

The painting had a dual function: it is accompanied by allegorical verses that associate the hircocervus servant's various animal parts with distinctive virtues that the college's students were meant to follow.

Upon entry to the foyer at the Club you are faced with a reproduction of the picture of the ‘Trusty Servant’ (see main image above), along with a Latin inscription and an ‘old’ English translation – the words of which have generally been translated as follows:

A trusty servant's picture would you see,

This figure well survey, who'ever you be.

The porker's snout not nice in diet shows;

The coat his neatness; the open hand his faith;

Girt with his sword, his shield upon his arm,

Himself and master he'll protect from harm.

A portrait of the Trusty Servant, painted in 1809 and still hanging just off Chamber Court at Winchester College.

You can find out more information at the following links: